If I failed horribly at sweet talking Sheila during the week, I more than compensated over the weekends. Sunday afternoons were spent with Njoki, another star in the constellation of village girls that I dreamt about dating. Sheila was definitely the  morning star, brightest of the bunch, and wholly out of my league. I consoled myself with the fact that Sheila never went to high school – I was too good for her, I concluded. Then there was Shiku, her neighbor. Shiku did go to high school. In fact, her and I attended sister institutions; I was at the Aga Khan Academy, she was at the Aga Khan High School. In the ‘academy’ lies all the difference. Her school was clearly a charity case, mine was the real deal – never mind that I was no more than a scholarship student. Shiku had that advantage over Sheila, but she was also way too wild for me. I’d see her hanging out with the boys I knew better than to associate with. These kids were partying, drinking and smoking, way before I even knew to worry about whether I was still too old to be a virgin. This was the crowd your parents went to church for, hoping and praying that you do not fall in with . These fellows skirted at the edges of the Anglican Church of Embulbul Youth Group; but it was quite obvious their suave moves were not confined to merely accompanying good, pious, Christian girls down the aisle. They had designs that were way more sinister, and the wickedness to target impressionable girls in the congregation. Someone shout “Safe sex!”

I convinced myself that Shiku didn’t really mean to be with this kiddos. I simultaneously dreaded and craved for a chance meeting on our dusty village footpaths. But such luck only opened further conundrums: whom should I look at when we passed each other. Should I stare at her face and ignore the guys jockeying around her like young lions? Would that not be interpreted as competition, and possibly get me an ass whooping? Sure, I wanted the girl, but not if I had to fight a pack of village thugs. In any case, the boys were their own downfall; they were too successful with the ladies. And so, inevitably, they’d get bored with Shiku and move on to the next conquest. 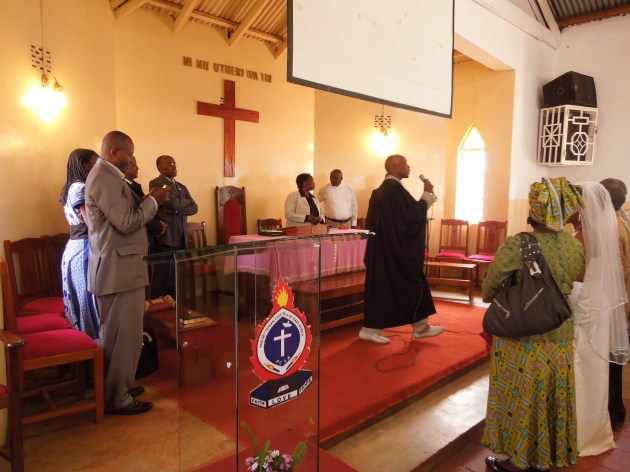 These fellows skirted at the edges of the Anglican Church of Embulbul Youth Group; but it was quite obvious their suave moves were not confined to merely accompanying good, pious, Christian girls down the aisle.

In Sheila’s social circle, there was also Sara and Emily. They were sisters; separated by an almost 10 year age gap. For some reason, Sara, the younger one, shared a Christian name with their mother. The older Sarah had a mental illness, and thanks to village prejudice, she was more commonly known as Mad Sarah. Mental illness ran in the family. At least two of the girls’ uncles were eccentric to the extreme. One of them, Wachira, was actually under medication; he would often disappear for a week or two. Upon his return we’d learn he’d been admitted at Mathare Hospital, Nairobi’s main mental health institution. Mwangi, the other uncle, was not under any treatment. He’d drink and turn into an entirely different person, physically violent. I watched Sara and Emily closely. I was fascinated by the lives of their extended family. How does one navigate such outrageous characters in the home, I wondered?

Mental illness was rather familiar, but not in any personal way. Walking to Ngong Hills Academy, I’d often run into Brownie and Njeri, our resident mad man and woman. Njeri was old, probably in her late 40s or early 50s by the time I started noticing her. You could go for months without sighting either of them, and then she’d be seated by the road, with a sack of her belongings. She was homeless, as far as I could tell, with minimal opportunities to shower and change her clothes. She held continuous conversations, either with herself, or with invisible companions. Njeri would gesture and her face would contort assent or dissent, as the dialogue progressed. Her right arm, missing a sweater sleeve, would point sideways, and then she’d burst out laughing, only to stop just as abruptly. Dressed haphazardly – a sweater missing buttons, tucked on top of a zipless coat, and underneath which you could see a floral dress – she was more to be pitied than to be feared. Brownie was known for walking. You could never see him seating. He was ever on the move. One day you’d see him at Ngong market, nonchalantly walking past the stalls filled with fruit and veggies. None bothered him. The next weekend you’d be driving past Karen, three kilometers away, and there would be Brownie, still on his walkabout.

The girls, Sara and Emily, were gorgeous. They set many hearts on fire. Mine included. Unfortunately, Sara was in class eight at Embul bul primary. I may have been a randy young he-goat, but even I knew that a high schooler such as myself could not be seen dating someone that much younger. Instead, I set my sights on her sister. Emily was older than me, more worldly. Her and Sheila frequented The Nest Pub & Restaurant when this joint first opened. The Nest was a spot filled with fast money. Matatu crews and young professionals, both just coming of age, would congregate here on weekends. Nest was THE place to see and to be seen. Shiku and her crowd of male peacocks were frequent customers. This was a lifestyle of partying that I could neither afford, nor explain to my parents. I was still in high school after all. And although I had undergone the customary rite of circumcision, I knew not to push my new found independence too far. If I couldn’t party with Emily, I appealed to her romantic side. Running into her one Sunday afternoon by the bridge that straddles a seasonal Kangawa river, I said “Sasa.” She paused mid step, and replied, “Poa, niaje!” We were walking in opposite directions, so we stood facing each other. She just stared back at me, letting me stew under the gaze her elongated eyelashes. I squirmed, willing my brain to not fail me at such crucial a moment. And, before my courage zapped out, I quickly blurted out my proposal “would you be my girl friend?” Although our greetings had been in Sheng, my appeal was delivered in English, of course. The Queen’s language was the surest way to a girl’s heart, so I’d learnt. She smiled, I think, then proceeded to reject my interest in her. She was too hot for me; in many ways I could have predicted her response. In any case, I may have been down, but I was not out, yet. There was still Njoki, Emily’s aunt, for me to proposition. I was hell bent on having a girl friend; I felt the deep urge to catch up with my compatriots. Having survived one let down, I was not too frightened by the prospect of another.