Thinking back, I ingested a peculiarly diverse range of cultural artifacts during my childhood. The play songs, rhyming teases, songs on radio, TV series, and movies that I consumed as a kid originated from all over the cultural map. There were Gĩkũyũ couplets that are probably older than my grandparents. Childhood jibs in Sheng were more recent, perhaps a few decades old. While the Congolese rhumba that dominated Kenyan airwaves was from the 90s, even more recent were TV series from the UK, the United States, and Australia. Some of the items recycled much older narratives. For instance, the movie series Gods Must be Crazy, filmed in southern Africa, retold prejudice against black peoples instituted during the Trans-Atlantic Slave Trade. Hanuman, his monkeys, and Sita who showed up on my TV screen on Sunday afternoons were revisions of the ancient Ramayana text.

Gĩkũyũ couplets – from my house to the main road, made of dirt and unpaved, you have two options. One is to weave around quarried lands, up a steep slope of dumped concrete and construction waste, to Barabara ya Najuu: the upper road. The other is to walk downhill, using the now official driveway, previously a stone quarry. Baba Shiro owned the small farm closest to the main road. Between his house and ours, the land had been sold by one of his brothers to a family friend. For almost a decade after we moved from Gĩkambura to Ngong’, this area was uncultivated, and overgrown with bushes. As a result, the half acre plot of land was home to a variety of wild mammals. Squirrels were in the majority, but so too were mongooses. Walking down the path, I’d see a number of bushy tails dash up a tree and then listen in amusement as their owners held a conversation up in the canopies. The mongoose family, however, was not known for speed or beauty. What they lacked in these two criteria they compensated for in cunning and sheer evil. Our mongoose neighbors established their presence by the number of chickens they devoured. Actually, not even devoured, just simply massacred.

Around dusk, or even later in the night, we’d hear our hens complain. Their clacking and crooning would indicate that an intruder had entered their coop. Often, the assailant mongoose would break an egg from one of the hens’ laying nests, and help itself to a meal. The shell and some remnants of the yolk would be visible the next morning. A loud bang on the chicken coop’s tin roofing would send its residents scrambling and the intruder would be forced into a hasty get-away.

More cunningly sometimes, the mongoose would not reveal its presence till the next morning. We’d go into the shed to feed and water the birds only to see a stiff hen on the floor. Closer inspection would reveal that its neck was punctured. This was how the mongoose had attacked it, using an incision wound on its neck to drink up its blood. Much like a vampire. The body would often be cold by the time we discovered it: carrion. At this point there was no choice but to bury the dead hen, or perhaps cut it up and prep it for the family dog. But this was generally discouraged. Feed the pet canine chicken on one too many occasions and the next thing you know, she’ll walk into the coop and grab a meal for herself. After all, why wait until the bloody mongoose had killed it first? Unsurprisingly, the mongoose’s wastefulness – it never feeds on the meat, just the blood – made its way into a children’s rhyme song.

My school uniform is torn

That mongoose! Stole a chicken! Stuffed it in it’s mouth! How very naughty!

We live on the flight path that commercial planes take on their approach to Nairobi’s Jomo Kenyatta and Wilson airports. The hum of an airplane engine, fifteen thousand feet above us, would send kids running and shouting. They’d send their voices high up, shouting messages to be communicated to their fathers who were far away, physically or emotionally.

There’s precedence here. A well-known folk tale from Central Kenya narrates the use of a dove to send a message from a wife to her husband. The man, so the story goes, had left behind an expectant wife and travelled far away to practice his trade as a blacksmith. In his absence, an ogre moved in and usurped authority it kept the pregnant woman well-fed so her and her unborn child would grow fat, and make for a sumptuous meal. To avert this disaster, the comely wife befriended a dove and trained it to send a message to her husband. This was a win-win deal. The dove got some of those delicious castor oil seeds; and the wife was saved when her man returned home and slaughtered the cannibal ogre. 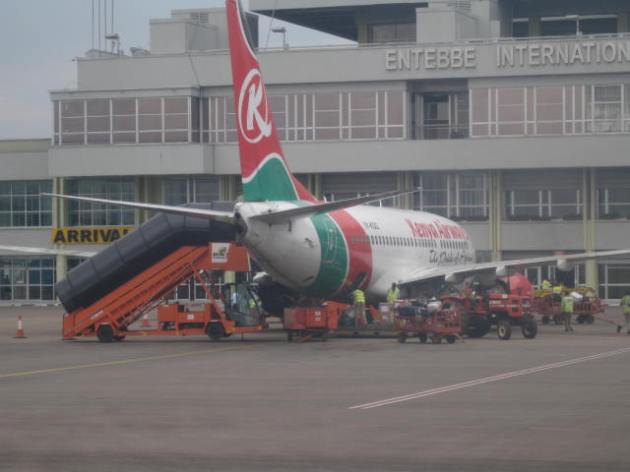 Childhood teasing – we’re 3 siblings in my family. Aside from the other illegitimate children my dad has never disclosed to us. Just kidding! I have two younger sisters, twins. Despite all evidence to the contrary, most people who meet them are convinced the two of them are identical. Actually, they’re just fraternal twins. When they were younger, and my mom invested in the habit of dressing them alike, they DID seem identical. As they’ve grown older however, their personalities have fleshed out in unique ways. They’re two different people.

We’d be walking across the village, the two of them dressed in similar costumes, and out of nowhere you’d hear kids shouting “mbili fanana!” The tune would conclude by suggesting that one of the two look-alikes smells of chicken poop. I never inquired from my sisters what they made of these taunts. In many ways, they weren’t malicious. But in their position, I’d have been horrified of all the additional attention.

When did dogs start wearing trousers and under pants?

Rhumba – sexy, jazzy sounds from the Democratic Republic of Congo, previously Zaire, have received ample play time on Kenyan radio since the late Fifties. Joseph Kabasellah’s “Independence Cha Cha” was as much a hit in Kinshasa as in Nairobi. Stars such as Mbilia Bel, Papa Wemba, Franco, Koffi Olomide, and many others have huge fan clubs across Kenya. In the 1990’s, Congolese “Ndombolo” took over the Kenyan entertainment scene like wild fire. The dance moves were borderline explicit, more often crossing into mature adult content. We loved it! Kanda Bongoman was not just a big time DRC musician with fanatic crowds in Brussels, Nairobi, and Paris, but also the self-given moniker by one of the milk hands in my neighborhood. This guy was as skilled in belting out Bongoman songs as he was in hand milking 7 heads of dairy cattle.

It goes without saying that as kids we did our best to karaoke Ndombolo lyrics. That we could neither speak, nor hear Lingala – the language in which most DRC music is composed – did not stop us. If we couldn’t get the lyrics right, we could at least create a re-mix. We made them up in our own way. The end result may not have stayed faithful to the original meanings, and I’m afraid we may have exercised that whole poetic license just a bit too much. There’s one particular remix that I especially associate with my time at Ngong Hills Academy. The licentious lyrics evoke memories of the terrible latrines we frequented as school boys. Those pits of disease were NEVER kept clean. Part of that certainly had to do with the fact that among a horde of 4 to 14 year olds there will be several who do not aim quite right when making a deposit. They’d then leave a nasty package on the latrine floor. The remnants looked like modern art exhibitions or the final products of a culinary experience involving omelets. Either way, these piles of shit were nothing pleasant to look at. And they stank to high heaven. Such incidents aside, they do not explain why many of the doors were often broken and in unhinged. Privacy was a rare commodity when you had a number 2 in mind. It is from that background that we began questioning fashion choices in dog world: what heralded the trouser-donning canines. Obviously, and memorably, this was done to the tune of the latest Ndonbolo track.